Cars are parking on the pavement ..

Reported in the Car parking category anonymously at 14:58, Fri 8 September 2017 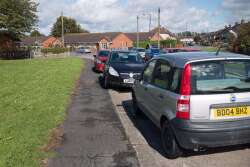 New double yellow lines were put in around Ashton Vale which have worked OK..but the spot in Risdale road just past the turning for Tregarth road is a nightmare as the road is not wide enough for cars to park opposite each other one side now parks on the pavement..The bus has to negotiate a passage between these cars...