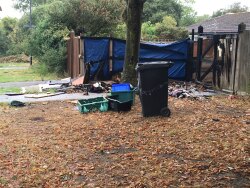 Along Inns court Drive, east of Travers Court. Domestic waste was left behind a property which was subsequently set alight. The resulting mess has been left and has now been added to.