Reported in the Flytipping category anonymously at 12:06, Thu 14 February 2019 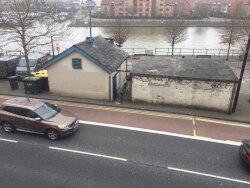 The gap between the two boat houses near the Grain Barge is becoming a fly tipping area. There is now a load of metal and broken glass which is dangerous and spoiling the picturess harbour. Can the rubbish be removed and signs put up saying ‘no fly tipping’.