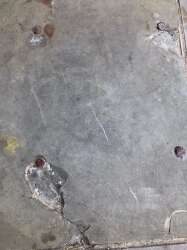 Following the removal of a bin on ST Augustine's Parade, the metal studs from the bin are still present and are currently protruding from the footway . The location of the studs are between the lamp column and the new taxi rank shelter on St Augustines Parade.