Reported via Android in the Flytipping category anonymously at 13:09, Fri 27 September 2019 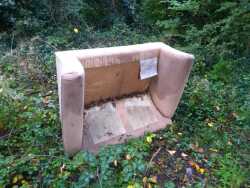 An old sofa has been dumped in the trees at the Oakhill Drive end of the Kingswear Road Open Space (Northern Slopes).