Used needles found on the lane beside the M32 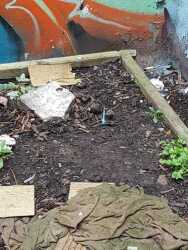 There are 2 used needles in the lane beside the M32. One of them is at the top right of a large flower bed and the other is on the right hand side of the flower bed near a wall. There also appears to be human faeces next to the needles.