Reported in the Pavement Defect category anonymously at 16:21, Mon 28 October 2019 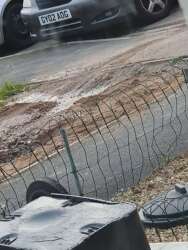 The drive of number 19 Lakeside was previously slabbed but was damaged by cars parking there, causing water to collect in the cracks and making the surface uneven and dangerous. The landlord had someone come and remove the slabs and make an even surface for replacement but the job was never finished. I believe the tenants and a number of neighbours have raised an issue to the landlord but all he has done is filled the holes caused by vehicle wheels with sand. Cars moving on and off the drive and dragging dirt and mud over the footpath and into the road so it is being brought into the houses when people have to walk past the drive to access their property. This has been an ongoing issue since the tenants moved in nearly 3 years ago, it was damaged when they moved in and the landlord was supposed to sort it but hasn't. Every winter the mud is unavoidable and the driveway is unsafe for the female tenant to park and get her young children out of the car. Because of this she parks elsewhere in the already over crowded street which causes issues with the other neighbours. Picture attached is today after the landlord has attempted to temporarily fill the holes himself.