Reported in the Car parking category anonymously at 12:49, Sun 9 February 2020 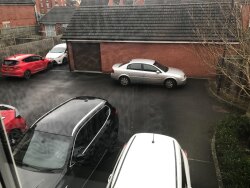 The silver Vauxhall has been left obstructing access to the three driveways opposite. The car hasn't been moved for a number of days (at least 5 at time of writing). I've checked with the DVLA and found the car is under SORN which I've reported to the DVLA as I believe the area is classed as a public road. I'm unaware of who the owner is but have confirmed they are not from any of the properties whose driveways are effected by it being parked there.