Obstruction of pavement by growth on fence 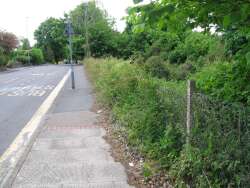 Although living in Coombe Bridge Avenue, I have been concerned, for some years, by the growth of Russian Vine on the fence which separates the Dingle Road from the Trym Valley below running along the length of the boundary fence opposite Dinglewood Close up to the Trym Valley entrance opposite the end of Coombe Lane.

In 2006 the weight of the vine, caused by year of neglect by the BCC was such that it broke the fence posts and the wire fence creating a safety hazard to pedestrian, and after identifying the risk I successfully persuaded the BCC to repair the posts and fencing.

However, each year since the vine continues to grow over the fence and partially obstruct the pavement (see photos).

As this has been neglected by the City Council, for reasons of ownership of the land, I have, since 2005 cut back the vine myself on both sides of the fence using my own equipment and taking about 3 days each time .

Accepting the fact that the land on the Trym Valley side of the fence is privately owned, there is no reason for the BCC not to cut back the vine on the pavement side or to clear away leaves and nettles which can obstruct passersby.

I have made this appeal on several occasions to no avail so I propose taking the case up with the Mayor as it is unsatisfactory that there there appears to be a steadfast refusal to take the action I request, bearing in mind that, for the past 14 years I have tackled the job myself.