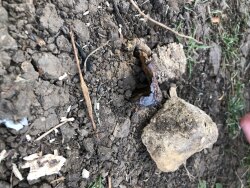 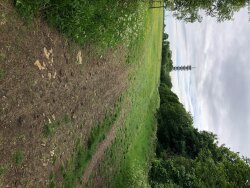 I think there used to be a metal gate on one of the paths in Stoke Park which was removed above the surface but left behind the buried supports. With foot traffic eroding the soil there are now several sharp metal pieces sticking out into the footpath. The one in the picture is in the centre of the path but there were several more over the area. We tried to highlight the most dangerous with rocks but someone could easily catch themselves on it if not paying close attention.