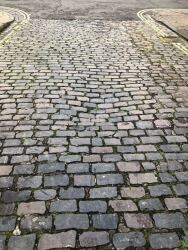 The cobbled street has old septik tanks and old sewer under it and it’s not holding up to the two wast carts that pull up next to Cotes Resturant every morning the subsidence has started and today extreme rain was running freely down to dip in the cobbles ! There is obviously a void below . Best regards Sam