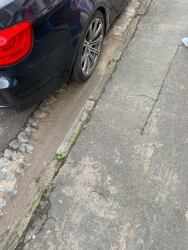 Raw sewage from blocked drain now on road edge, really smelly and risk of children walking in it