Russian Vine of over 100 yds of fencing along Dingle Road

Reported via desktop in the Obstruction category anonymously at 14:43, Wed 10 November 2021 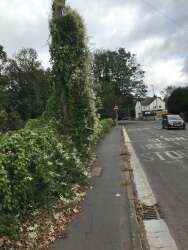 Despite many reports to say this is closed ad that Contractors have been allocated. Nothing has been done during the whole of this year and the vine continues to encroach over the fencing and part block the pavement from opposite Dinglewood Close to opposite end of Coombe Lane. This is a ridiculous state of affairs which has been reported to the Mayor in the past 2 weeks. I want a honest report and feed back PLEASE!

This report is now closed to updates. You can make a new report in the same location. Please reference 3115979 in your new report if it is an update on this one.