Rubbish and duvet left out on middle of street

Reported via Android in the Rubbish (refuse and recycling) category anonymously at 13:05, Wednesday 6 April 2022 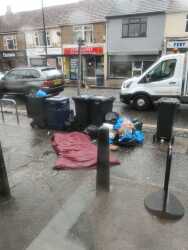 A lot of rubbish left out on the street. Awful smell and disrupting local businesses