Reported via iOS in the Car parking category anonymously at 12:29, Thursday 12 May 2022 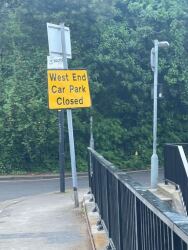 The west end car park finally opened up a few weeks back yet signage still tells people it’s closed. This then makes people park on the surrounding residential streets during non RPZ times, causing a knock on effect. It can’t be that hard for the council to remove this sign, surely.