Reported via desktop in the Toilet issue/damage category anonymously at 21:57, Monday 22 August 2022 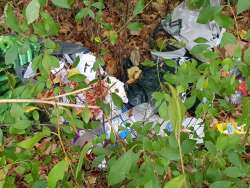 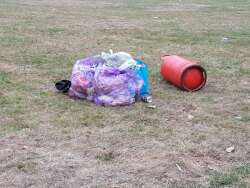 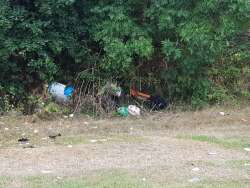 The Travellers who have been parked up on Begbrook Green Park for the last week left quite swifty this evening, they leave behind vast amounts of litter, items include gas canisters, a mobility scooter, old duvet - I attached a selection of photos.

There are vast numbers of bin bags, scattered across the park, every bush surrounding the area has toilet paper/wet wipes or nappies littered beneath it.

There are human/dog faeces everywhere, including the children's play area.

Large areas of the upper field have the remains of garden waste, dumped just beyond the rock-climbing frame, more has been left by the new Orchard.

I would appreciate swift action clearing the park fully of waste, this includes every scrap of toilet paper, none of the residents should have to deal with this whilst walking their dog. Immediate action taken to prevent them gaining access to the park again, several new bollards at the far end of the road and possibly a new tree opposite 3 Five Acre Drive.

The field itself will need some attention, it certainly isn't fit for the football season - numerous fires and tyre treads.

This report is now closed to updates. You can make a new report in the same location. Please reference 3773680 in your new report if it is an update on this one.