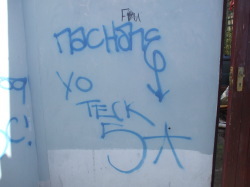 Recent grafffiti on wall of property adjecent to the lane.Graffiti has already been removed on two previous occasions.Have reported to the police who say there is nothing they can do.