BT manhole cover broke. Very dangerous. Has been barriered off

Reported in the Utlility Covers category anonymously at 12:27, Wed 28 September 2016 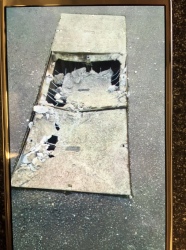 Our driver had to mount the path to allow other cars to get passed. As you can see from the picture it's caused some significant damage that will be needing repaired straight away.